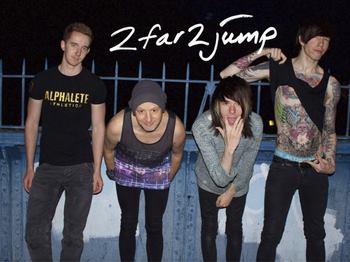 How did the band get started?

Rupert already knew Aaron before I joined, they used to play around together on cover songs and wanted things to move forward, I was also looking for a band in the area so I got in touch with them and it just worked.

Where did the band name come from?

Rupert thought it was a cool name and bought the rights to it and all the domains before suggesting it to us, but we liked the name enough to go with it anyway… I guess it is pretty unique and works with our sound.

How would you describe your music?

To throw a basic label on it, I’d say alternative/pop punk and kinda mainstream but we really just write what we feel and let people decide what they want to call it.

Rupert or one of the other guys usually comes up with a track, and I shape it to work well lyrically with the vocals. I put vocals to it on a demo and we show it to whoever in the band hasn’t heard it then they add their element in the studio and it goes from there really, getting a little tighter each time we play. We tend to get songs sorted pretty quickly.

What is your favourite song to perform live?

At the moment it’s probably Aspirations, I love playing all of them though. It kind of depends on the crowd on the night.

Who is your favourite musician/band?

At the moment I’m listening to a lot of Real Friends and Knuckle Puck. I love so many bands though. PVRIS are another one.

Is there an artist that you feel is underrated?

When it comes to unsigned bands I think a lot of them need to find out who their target audience is and who they want it to be, and work on advertising more to get
in front of the right people. Not enough bands seem to do that and I’ve always been up for helping other bands succeed. Yeah it can cost money but I’m not gonna remember my balance being £30 higher or whatever, what I will remember is succeeding with another band and playing shows together.

What was your first job?

I’ve never had a ‘proper job’ for more than like a month. I believe that if you work on something you love more and get paid less to do it, in future you’ll end up being paid more to do less.

Is there one thing that you couldn’t live without?

How do you find juggling your solo career alongside your time with the band?

Pretty easy at the moment, I love being productive and we’re currently working on our debut EP as a band whilst I’m currently working on my debut EP as a solo artist. It’s just with my solo thing I’m doing everything at the moment like production and playing almost everything you hear on the tracks. It’s nice cause you have more control over it when you’re doing a whole project yourself. I set the record label up i’m putting my stuff out on too.

We just put out our third single ‘A Place To Run’ and we have a music video for ‘Starlight Estate’ coming out real soon! Then we’re booking a string of shows across the UK and starting promo for our debut EP. We have a photoshoot tomorrow, that could be cool as we could do with new promo pics! The last we did were kinda crappy and it was freezing. These new ones should look sick though.

And what can we expect from the soon to be released video for ‘Starlight Estate’?

Me sitting in underpasses, looking homeless… nah but really there’s a lot of driving shots and footage of me walking around my friends estate at night. The songs about travelling and having lots of temporary places to reside. It also has us playing in front of huge light box with shots of us travelling overload.

You can check out 2far2jump here:

2far2jump are playing at Asylum in Chelmsford on the 4th of November, for which further information can be found here.

The home for all my text based interviews and reviews.